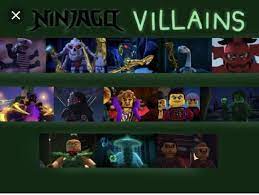 There were several villains in Lego Ninjago and each one has tried to take over Ninjago for their own benefit.

#6—Clouse. Clouse was Master Chen’s right-hand man. He did all the dirty work for Chen. Clouse would use his magic to sabotage the tournament. Clouse was sent to the cursed realm along with Master Chen. Clouse died in the cursed realm ultimately becoming a ghost with Master Chen. He later reappeared in season six at the beginning to find a magical tea pot to bring back a Gen to grant his wishes, but ends up being taken by the Gen. He dies permanently never to be seen again.

#5–Morro, elemental master of wind. Morro is a ghost who escaped the cursed realm as Master Chen and Clouse were being put into the cursed realm. Morro wanted to get revenge on his old teacher for not becoming the Green Ninja. He ran away to find the first Spinjitzu Master’s tomb, but never returned. Morro dies as he is looking for the Spinjitzu Master’s tomb. Morro comes back and possesses Lloyd’s (Green Ninja’s) body so he can find the tomb again and release all the ghost into Ninjago so he can take over Ninjago. He ends up failing and not wining. He permanently dies and hands the realm crystal off to his former master and is never seen again.

#4–Lord/Sensei Garmadon. Garmadon started out as a villain but later turned good. When he was little, he was bitten by the Great Devourer. The Great Devourer turn his blood evil and his heart cold and dark, but he didn’t completely turn evil until later in his life. He got married and had a son. One day the evil in his blood was really starting to take over. He tried to steal the Golden Weapons, but he was stopped by his brother Wu who banished him to the underworld. Garmadon was brought back by his brother to help save his son. Garmadon later betrayed his son and the ninjas to take over Ninjago. He was defeated by his son, who ultimately turned him good.

#3–Princess Harumi/ The quiet one. Princess Harumi also known as the quiet one used her power as princess of the royal family to get close to the ninjas and use the green ninja (Lloyd) and his mother so she could bring Lloyd’s father back to life. However, she wanted to bring back the evil side of him. She used her team to kill her family and trick the ninjas into thinking she was helpless and week. She almost killed Lloyd by drowning him. Harumi used Lord Garmadon to take over Ninjago but was defeated and fell to her death.

#2–The Overlord. The Overlord started out as just a glowing orb that would help Lord Garmadon but in the end, he took over his body to have control over a mortal form. Later in season three, he used Pythor, a temporary right-hand man, to help get Lloyd’s golden power. He had to steal Lloyd’s golden power to create a body from scratch so he could be mortal again. The Overlord fought with the first Spinjitzu Master before he was banished to the dark island. The Overlord was defeated, but he was able to kill the ice ninja as he died. The story is that the green ninja was supposed to defeat him, but the ice ninja did it instead.

#1—Nadakhan. Nadakhan is a gen not a genie. He was imprisoned in a tea pot and could not escape. Nadakhan was imprisoned by a pirate named Soto, who he fought against. Clouse found the tea pot so he could have his own wishes. Nadakhan would grant people wishes, but when they wished for something, they would never get what they wanted because he would twist their words and on their last wish, making them wish it all away. When they would wish it all away, he trapped their bodies and souls in his sword and the more souls he got, the more powerful he was. Nadakhan captured all but two ninjas. He also got Lloyd’s mom and the ninja’s master. He used one ninja named Nya to get ultimate power and ultimate wishes for himself. The other ninja he held captive so he couldn’t stop him. Nadakhan was the leader of a pirate crew that helped him get his power and then betrayed him because he went power mad. He was defeated by having to use his last wish to wish the tea pot was never found.

This was something I had to think hard on, there are so many villains to chose from. Each season had its own villain but some bad guys from other season will come to help the main villain for that season.